Reviews - The Dandelion Diary: the tricky art of walking, by Marguerite Black

THIS exquisitely written book is like a stroll through an old Eastern Cape garden, full of sounds and smells, colours and textures, described with the sweet and beautiful detail of a miniature landscape.
“Loquats half-maimed,
eaten by mousebirds … Garden of trampled dandelion,
the jungle of a child.”

Marguerite Black is blonde and willowy, has film-star looks, talent, drive, courage and intelligence, with an enviably supportive family. She also has Friedreich's Ataxia, a crippling neurological disorder that has worsened over the years. Now, aged 28, she can't walk unaided, no longer has proper control over her hands and arms, and probably faces severe speech impairment and cardiac disease in the not too distant future. Given her prognosis, The Dandelion Diary could be expected to be sombre and heart-wrenching; instead it is an affirmation of life, of love and of joy. She presents her childhood memories not as faded Polaroids, but as detailed scenes, set within diamonds; this is a woman who has always had a sensual appreciation of the moment, and the talent to allow us to relive it with her in crystal clarity.
Black spent her childhood in Grahamstown, just a few blocks from where I grew up. Her father worked in the economics department at Rhodes University, and was one of the most popular lecturers on the staff. Obviously intelligence, good looks, talent and charisma run in the Black family, along with the ataxia.
When she describes her childhood, she dwells on a wealth of positive sensations: swimming in the dam in the summer; polishing the copper in the garden under the loquat tree. The raucous clamour of the hadedas, the sound of children's songs, the singing of myriad birds and buzzing of insects, the soporific January heat, and the sudden, violent electric storms are all brought to vivid life not only in her prose, but also in her poetry.
For Black, the glass always seems to be at least half full, and even hot nights made terrible by mosquitoes, and bitingly cold Eastern Cape winters are fondly remembered.
It was only after the family moved to Stellenbosch that the ataxia, which already plagued her older brother, began to manifest. Black’s early life should read like a nightmare since her poor balance resulted in constant accusations of drunkenness, and two car accidents — one of which resulted in the death of a close friend — exacerbated her problem. Yet she remained strong and positive.
“In this maximum security prison of tamed instincts
My once malleable body has been jolted
Into this chair on wheels,
My impulses are dulled.”

Carefully faded photographs lend an intimate feel; we see her as a child with her beaming mum, her sexy dad, her gorgeous brother. But as an adult, we have Black in a wheelchair, on her modified scooter and leaning on her walking aid.
She and her brother both have jobs where they work with others who have disabilities, and actively promote public awareness of their disorder — he through Remix, the dance company he formed for dancers with handicaps, she by her PR work and writing. “I have an urge to put words into the void that surrounds ataxia. My writing is a way of saying: this is also important, because this is my truth."
Dandelion Diary does indeed put words into that void, and ends by quoting from an e-mail campaign the siblings started to encourage research on ataxia, and to offer their services as test subjects. The last words of the book encapsulate Black's philosophy. “We will continue," she says. “Fighting and hoping.”

Reviews of The Dandelion Diary

The Dandelion Diary: The tricky art of walking 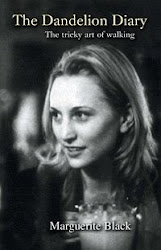